Next time you go to the Post Office, it may well turn out to be a bank 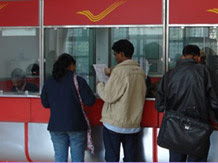 A long-pending dream of India Post to have banking operations is now taking a final shape. The Department of Post has moved a Cabinet note with the government providing Rs 500 crore as seed capital to India Post for this purpose. This is the minimum paid up capital required under the final norms for banking licenses put up by the Reserve Bank of India.


Financial help from the government is needed since India Post ran a deficit of Rs 5,805.9 crore in 2011-12, though 8.5% lower than Rs 7,899.3 crore in the previous year.
India Post plans to start banking operations in 50 branches, a key official said.

The official said all the initial work on applying for a banking license to RBI has been completed and the only task left now is to formally submit its application.

The deadline for submitting applications is July one and in between only two working days are left.

"Our officer is in Mumbai and we will file the application before the deadline," the official said.

When asked that it would be too costly an affair to convert a post office into a bank, the official explained that both post office work of India Post and banking operations will simultaneously exist.

She said India Post can always squeeze a little space in its existing post offices. "We can give the bank a completely different branding and so the bank and post office can coexist ," she said.

"That little space for bank branches will be built from the scratch. But, the existing infrastructure across 1,50,000 post offices will be leveraged. We are naturally the most fit candidate to open a bank as no one can match the department's reach," the official said.

She said India Post has around 1,50,000 post offices, while all the other bank branches combined would come to around 50,000 only.

"So, other aspirants have a reason to worry, but we qualify RBI's eligibility criteria in all respects," the official said.
When other private banks can have a lean and mean approach in terms of bank branches and can still be successful, so can India Post, the official asserted.

But, the idea is to not to open branches across all the 1,50,000 post offices, but have a selective play. "If we cover the entire network, it will be too extensive, therefore we will open in places where there are not other banks etc. And our post man could act as a banking correspondent enabled with micro-ATMs," she said.

To become a bank, India post will have to restructure its shareholding. There is a stipulation in the RBI's norms that promoter companies of entities wishing to set up banks should be 51% held by the public. At present, India post is 100% government of India holding.

Earlier, the finance ministry is understood to have opposed India Post’s plan as the postal service doesn’t have the expertise needed in relevant areas, such as handling credit.

The Department of Post has a few savings instruments like post office savings scheme, besides acting as a distributor for mutual fund companies. It also has a life insurance scheme— Postal Life Insurance.

The official said the banking correspondent model as enshrined in DBT will be performed by postman. He will get an additional commission of 0.07% over and above his regular salary for every new deposit.  The official said that moves are also afoot to link all post office branches with core banking solutions (CBS), which would further enable them to function as a full-fledged bank.