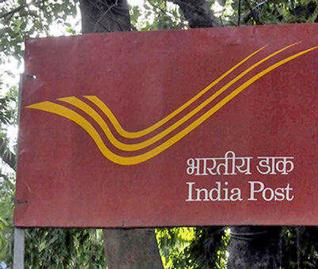 The postal department plans to enter the banking business with the Reserve Bank of India deciding to grant new bank licences to entities with credible track-record.

Sources said the Department of Posts, which has a strong foot print in rural areas, has appointed Ernst and Young (E&Y) as the consultant for the proposed ‘Post Bank’

“Ernst and Young is expected to submit a detailed project report by April, after which all the necessary measures will be taken up to apply for banking licence,” a source at the Ministry of Communications and Information Technology told PTI.

Of the 1.55 lakh post offices in the country, around 24,000 district offices may be ready to offer banking services in the next two years.

“Post Bank shall not only take care of the banking needs of the rural poor but shall also converge with micro-insurance and micro-remittance services of the DoP,” the source said.

As per data shared with Parliament, there were over 26 crore operational small savings accounts in post offices as on March 31, 2012, having deposits worth Rs.1.9 lakh crore. 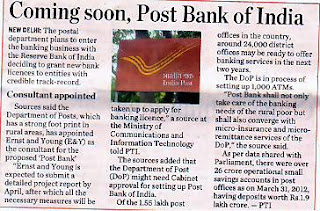 CONFEDERATION OF CENTRAL GOVT. EMPLOYEES AND WORKERS
PRESS STATEMENT
About 8 lakhs Central Government employees took part in the 48 hour (two day) general strike yesterday and today organised by the Indian working class as per the call of the Joint platform of 11 Central Trade Unions of the country. Besides 5 lakh Defence Civilian employees are also reported to have participated in this historic action.

The Strike was total and cent per cent in Income tax and Postal departments. The participation ranged from 60 to 90% in other Government of India organisations except in the Central Secretariat. As per the report, the strike was total in Assam, Tripura, West Bengal, Orissa, Bihar Andhra Pradesh, Tamilnadu, Kerala, Chhattisgarh and 60 to 70% in Rajasthan, Gujarat, Madhya Pradesh, Punjab, Haryana and partial in other States.

In Delhi, the Income tax and RMS offices of the Postal Department virtually remained closed. Not a single employee reported for duty in these offices. Many offices of the Civil Accounts and Post offices in Delhi also did not function on these two days.

Many establishments of Printing and Stationery, Indian Bureau of Mines, Geological Survey of India, Medical Depots, Customs, Ground Water Board, ISRO, Directorate of Marketing Inspection, Civil Accounts, Central Public Works Department remained closed throughout the country on both the days.
The National Secretariat of the Confederation places on record its sincere gratitude and appreciation of the efforts undertaken by the State/Branch level leaders to make this historic action of the Indian working class a resounding success by eliciting the total participation of the Central Government employees. The success of the two days strike action will no doubt embolden the employees and workers to chalk out intensified action programme including indefinite strike action to compel the Govt. to rescind the anti-people economic policies pursued since 1991.
K.K.N. Kutty
Secretary General.

The Council meeting was inaugurated by Com Shib Sankar Roy. Com. Pranab Chattopadhyay and Com. Pijush Roy were the main speaker of the open session on 10.02.2013. 37 Divisions reported about strike on 28.02.2012 & 12.12.12 and other divisional problems and practical situations to observe the two days strike on 20-21.02.2013.
Posted by Sirshendu Sundar Sahoo,Secretary,AIPEU,Gr-C at 7:47 AM No comments:

It is  intimated that  the  following officials   will  represent  this AIPEU, Gr-C, Tamluk Divl. Branch   in the ensuing monthly meeting. The officials   may be relived in time. The new items of   agenda to be discussed in the   meeting in addition  to the   old items   are  given  hereunder .

It is intimated that  the  following officials   will  represent  this AIPEU, Postman, Multi-skilled Gr-C/GrD, Tamluk Divl. Branch   in the ensuing monthly meeting. The officials   may be relived in time. The new items of   agenda to be discussed in the   meeting in addition to the   old items   are given hereunder .

Dear Sir,
Following long pending staff grievances are furnished for your kind intervention and taking prompt action so that the problems be solved earliest:
1.      There is a order for revision of TRCA, by which all the new recruited GDS employees will be benefited. But the same is yet to be implemented in our Division.
2.      Anomaly in payment of arrear in c/w implementation Natarajmoorthi commission report, not yet solved.
3.      Preparation of GDS seniority list.
4.      Nonpayment of Cycle Allowance. Case of Satya Narayan Maity, GDSMD, Byabattarhat SO.
5.      Paid leave of Sri Phanindra Nath Barman GDSBPM Gurgram BO for the year 2011 and  2012 not yet sanctioned.
6.      Paid leave of Sri Jitendra Nath Bera GDSBPM Chaknan BO for the year 2011 and  2012 not yet sanctioned.
7.      Paid leave of Sri Barendra Nath Giri , GDSBPM, Baroj for the year 2011 and  2012 not yet sanctioned. Beside these ,no GDSBPM of Mathchandipur Sub Division are not getting any paid leave.
8.      Paid leave of Sri Tushar Kanti Samanta , GDSMC, Mahishadal  for the year 2012(16-6-12 to 25-6-12) not yet sanctioned.
9.      Paid leave of Rabindra Nath PanditGDSBPM Basanchak BO not yet sanctioned.
10.  Non payment of Combined Duty Allowance. Case of Sri Tushar Kanti Samanta , GDSMC, Mahishadal; Sri Uttam Kumar Bera,BPM,Gopalpur BO; Sri Goutam Kumar Kar,BPM, Gobindapur Bajitpur.
11.  Non supply of umbrella to Sri Barendra Nath Giri , Baroj.
12.  Non delivery of PRAN card. case of Madhuri Maity,BPM,Rampur BO; Mosaraf Hossain Shah, BPM Kendemari BO etc.
13.  Non supply of PLI/RPLI forms and RPLI policy bond.
14.  Relieve from Job combination duty. Case of Smt Madhuri Maity. Another GDS of that office is ready to work on payment of CDA.
15.  Sri Bishnu Pada Maity,GDSMD,Madhabpur BO worked as Postman , Barbaria w.ef. 29.01.11 to 31.03.2011. Till date he has not been paid the outsider bill . His nominee also not yet been paid. His Paid leave for the year 2011 & 2012 not yet sanctioned by the SDI(P). This case has been discussed with you several times but still not solved.
16.  Sri Haripada Pattanayak GDSMC Srikantapur BO was ordered to work as GDSBPM. Sri Prakash  Kr Maity, GDSMD,Birulia who was officiating as GDSBPM Srikantapur BO didn’t handed over the charge of BPM to Sri Pattanayak and went to CAT. However Hon’ble CAT dismissed the case. But so sincere effort has been seen from the Divl Head to implement the order when Sri Pattanayak is ready to hold the charge of BPM.
17.  Four (4) GDS employees were whimsically terminated from service without showing any proper reason. There may be some administrative fault but there was no fault on the part of those innocent employees. They are victimized. The job of those GDS employees should be restored.
Thanking you,
Yours faithfully,

Thanking you,
Yours faithfully,
Encl: As stated.

In accordance with the provisions of Sub Section (1) of Section 22 of the Industrial Disputes Act, 1947, we hereby notify that all the Postal/RMS/MMS/Administrative & Postal Accounts Employees and the Gramin Dak Sewaks will go on two days strike on 20th and 21st February 2013. The demands for acceptance of which the employees embark upon two Days Strike are detailed in the Charter of Demands enclosed.

1. Take Concrete measures to contain price rise.
2. Take Concrete measures for linkage of employment protection with the concession/incentive package offered to the entrepreneurs,
3. Ensure Strict enforcement of all basic labour laws without any exception or exemption and stringent punitive measures for violation of labour laws,
4. Universal social security cover for the unorganized sector workers without any restriction and creation of a National Social Security Fund with adequate resources in line with the recommendation of NCEUS and Parliamentary Standing Committee on Labour.
5. Stoppage of disinvestment in central and state PSUs.
6. No Contractorisation of work of permanent/perennial nature and payment of wages and benefits to the contract workers at the same rate as available to the regular workers of the industry/ establishment
7. Amendment of Minimum Wages Act to ensure universal coverage irrespective of the schedules and fixation of statutory minimum wage at not less than Rs 10,000/-.
8.   Remove all ceilings on payment and eligibility of Bonus, Provident Fund; Increase the quantum of gratuity.
9.   Assured statutory Pension for all
10.       Ensure Compulsory registration of trade unions within a period of 45 days and immediate ratification of the ILO Conventions nos 87 and 98

1.  Appoint Seventh Central Pay Commission for revision of wages of Central Government Employees including Gramin Dak Sewaks. Grant merger of 50% of DA with pay for all purposes, including GDS.
2.  Stop abolition of posts and restore all abolished posts with immediate effect.
3.  Grant Civil Servant status to Gramin Dak Sewaks and extend all benefits of regular employees to GDS also. Enhance GDS Bonus ceiling from 2500/- to 3500/- . End discrimination in wages and other service conditions.
4.Revise the wages of Casual, Part-time & contingent employees with effect from 1.1.2006 at par with the minimum pay scale implemented as per 6th CPC recommendations. Regularisation of the services of casual labourers.
5.Drop the proposal for privatization of Postal Sector and retrograde clauses of the National Postal Policy 2012.
6.Revision of OTA rates as per the Arbitration award.
7.Complete the cadre restructuring and honour the assurance given to staff side.
8.Remove arbitrary restrictions imposed on compassionate appointments.
Posted by Sirshendu Sundar Sahoo,Secretary,AIPEU,Gr-C at 7:14 AM No comments: